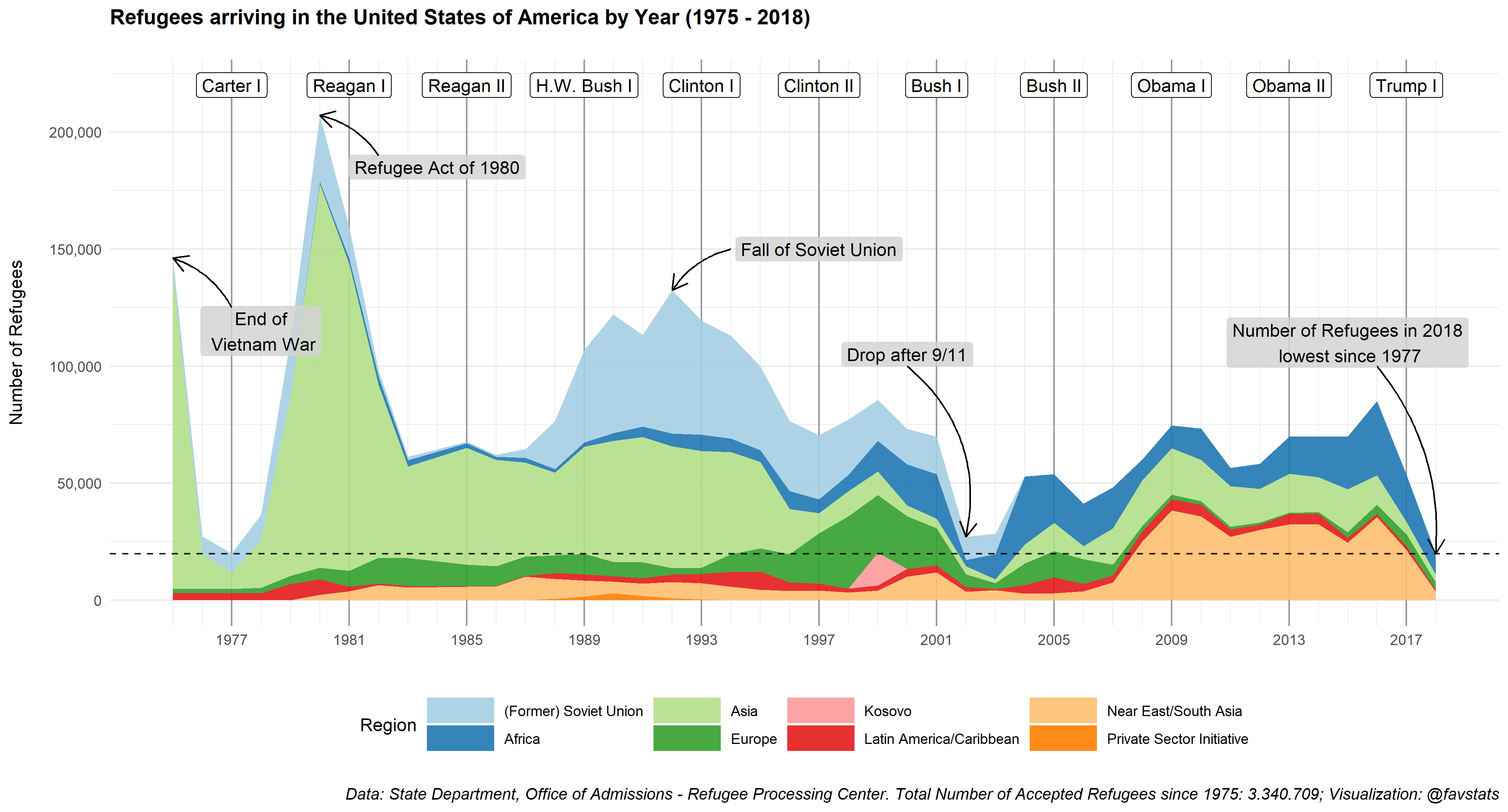 Refugee Acceptance in the US over Time

A Short History of Refugees in the U.S.

The United States has a long history of accepting refugees fleeing war, violence or persecution. From the aftermath of World War II to wars in Asia and the collapse of the Soviet bloc, there has not been a shortage of people seeking to escape dire conditions and applying for refugee status in the United States. According to State Department data, more than 3.3 million refugees have been resettled in the United States since 1975.

After the Vietnam War and the record high number of refugees from Southeast Asia, Congress passed the Refugee Act of 1980 (signed into law by President Jimmy Carter), which established the Office of Refugee Resettlement, standardized the refugee admission process and serves as the legal basis for the U.S. Refugee Admissions Program (USRAP) to this day. The year the law passed, refugee admissions peaked at an all-time historic high with more than 200,000 individuals being admitted to the U.S., largely from Southeast Asia. With the fall of the Soviet Union and the collapse of the Eastern bloc, refugee numbers peaked again in the early to mid-1990s with a total of 776.000 arrivals between the period of 1990 and 1996. Out of those, 40% came from the Soviet Union or countries previously under its control. Between 1997 and 2000, another 300.000 refugees arrived, mostly from Europe (37%) due to the wars in former Yugoslavia. Since then, refugee admissions from Europe have decreased significantly – only 8% of all refugees resettled in the U.S. between 2001 and 2018 came from Europe.

After the 911 attacks, refugee numbers experienced a significant drop as President George W. Bush halted admission processes for several months. In 2002 and 2003, the U.S. took in fewer than 29.000 refugees each year, down from 70.000 admissions in 2001.

Starting in 2004, refugee admissions started to increase again. Almost half, 50.000 out of 107.000 refugees in 2004 and 2005, came from Africa alone. In the following years, African refugees are increasingly becoming a greater share of all admitted refugees.

During the Obama administration, admissions mostly stayed between 55,000 and 85,000 refugees per year. In 2016, President Obama raised the number of refugees by 5,000 (from a previous ceiling of 80,000) to account for the refugee crisis caused by the escalating conflict in Syria. In order to adequately respond to the crisis, the ceiling for accepted refugees was supposed to be raised from 85,000 to 110,000 refugees in the fiscal year 2017.

However, the Trump administration discarded the suggested ceiling and even set the cap to 50,000 refugees for fiscal 2017. Trump lowered the cap again for fiscal 2018 to 45,000 admissions, although the actual number of refugees that were resettled in 2018 was less than 20.000: the lowest number since 1977. Coming up in 2019, the cap is going to be set at 30,000 which is the lowest number since the existence of the program.

Who are the Refugees

The state department provides us with some demographic information about the refugees from 2002 onwards. Except for three years (2005, 2006 and 2016), most of the admitted refugees in each year were Christian. Here too, we can see a sharp decline once the Trump administration lowered the cap in 2017 and 2018. While the ratio of accepted Muslim (46%) and Christian refugees (44%) in 2016 was almost equal, Muslim refugee admissions dropped to 35% in 2017 and 16% in 2018, despite the fact that a significant chunk of global refugees are from countries where Islam is the predominant religion. The majority of Muslim refugees in 2018 came from Myanmar (1117 individuals or 31% of all Muslim refugees that year), fleeing an ethnic cleansing campaign that killed thousands. The next largest groups of Muslims in 2018 are from Afghanistan (806 refugees or 22%) and the Democratic Republic Congo (422 or 12%). But the Trump administration did not only cut back on Muslim refugees. Despite vows to protect persecuted Christians all around the world and greater acceptance rates than their Muslim counterparts, the lowered cap slashed the number of accepted Christian refugees by more than half since 2016: from 43,000 Christians in 2016 to 17,000 in 2017 and 2018, respectively.

When it comes to gender, the balance is quite equal with slightly more men than women admitted as refugees (52% male). The largest group of refugees admitted between 2002 and 2018 is below 14 (30%) and roughly half of all refugees are 20 years old or younger. The U.S. department of state also provides us with data concerning education levels of admitted refugees. The largest group has completed secondary education at the very least (29%), followed by primary education (26%). 9% of all resettled refugees have a University-level degree.

Where do Refugees come from?

The United States differentiates between refugees and asylum seekers. A refugee is defined as as any person that “has a well-founded fear of persecution on account of race, religion, nationality, membership in a particular social group, or political opinion.” Refugees are typically admitted through the UNHCR’s Resettlement Program after their refugee status has been assessed and they have been vetted by the State Department, a process that takes at least 18 months. While many immigrants, legal and undocumented, come from Central and South America, U.S. regulations make it difficult for them to qualify as refugees as they have to present themselves at a port of entry or be within the territory of the U.S. to become asylum seekers (which refers to a different process).

Where do Refugees go?